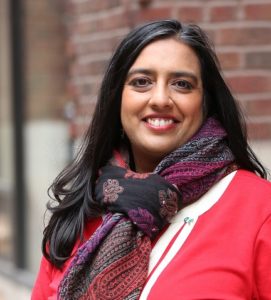 The recent avalanche of public outcry about sexual harassment began just as the non-profit I work for—Women Employed (WE), advocating for gender equity since the 1970s—was organizing an event, Everyday Feminism, on making the workplace better for women. The event featured a dynamic panel of Chicago leaders including Chicago Says No More founder and Mesirow Financial COO/CFO Kristie Paskvan.

We know power relationships have been used to perpetuate this intimidation, across many industries; most recently, we’ve learned of harassment by prominent men in Hollywood, media, technology and politics. What we’ve heard less about is women in service industries, such as restaurant service or hotel housekeeping, who are particularly vulnerable to sexual harassment, since their wages often depend on pleasing the customer and therefore being put in the position of deciding between their livelihood and their dignity.

At the event, I described the fundamental changes that are necessary in the way we think about this issue as employers and employees. The response to the outcry on sexual harassment has focused on instituting or improving training and policies for reporting misconduct. And while these shifts in business practices are welcome, and needed, I believe there are crucial improvements needed to deal with sexual harassment that go further. To make real change, employers must understand the issue goes beyond an incident or a bad actor, and endeavor to provide safe work spaces and inclusive work cultures. It requires a commitment on the part of the employer and the company to build a culture that does not tolerate or normalize the dehumanization and humiliation of harassment. These changes include:

There are indeed roles that ALL of us can play in combating sexual harassment, and that’s why the Women Employed team developed this tip sheet. This tool is meant to provide information, guidance, and support to help better identify sexual harassment, respond to it, and report it.

At Women Employed, we, like so many others, were thrilled to learn Time magazine chose “The Silence Breakers” – the many people who have given voice to the issue of sexual harassment – as the 2017 Person of the Year. We have been inspired and motivated by Tarana Burke’s #MeToo movement as well as long-time advocates against sexual harassment like Anita Hill.

“This reckoning appears to have sprung up overnight. But it has actually been simmering for years, decades, centuries,” as the Time cover story says. In the 1970’s, advocates for gender equity like Women Employed worked tirelessly to name sexual harassment and shine a light on how devastating such misconduct was to working women. As we’ve seen, the underlying framework of sexual harassment – an abuser who uses power to violate the boundaries and integrity of another individual – continues every day.

While the Time magazine acknowledgement is gratifying, we know it only is the beginning of what is, hopefully, a new era.

None of us can afford to be passive. It is incumbent upon all of us to use the power and privilege each of us has, to support those who are harassed, hold those who harass accountable, and create a workplace that does not tolerate sexual harassment.

This isn’t a new issue; this is a new moment, and a new opportunity to advance safety, fairness and gender equity.

Sharmili Majmudar is a member of the Chicago Says No More Workplace EAP Task Force and is director of Strategic Partnerships at Women Employed, a non-profit organization advocating for economic equity for working women and their families. Majmudar was formerly the executive director of Rape Victim Advocates and has 25 years of experience in advocacy against gender-based violence.