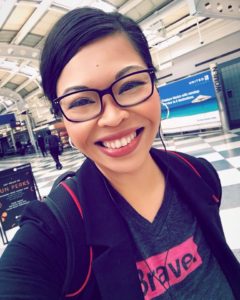 Mae Flores on her way to TEDx Hoboken at O’Hare International Airport on November 2, 2017.

It was my final year at Hinsdale Central High School. I was 18 years old. My family was on a cruise in the Caribbean during the New Year’s holiday. That was when it first happened.

I always was a happy kid and grew up with privileges most kids could only dream of while living in a western suburb of Chicago. I had strong female role models in my life. Some people associate being victimized with poverty. I was the opposite. I was safe, comfortable and protected.

Every year my family went on trips during the holidays. One year it was Captiva, other times we visited Marco Island or Naples, Florida. In 1996, my family thought we would do something different and we went on a cruise to the Bahamas.

On New Years’ Eve, after a formal dinner hosted by the ship, the teens separated from their parents and gathered in one of the dance clubs where we would countdown to the New Year. Nineteen-ninety-seven was coming and I couldn’t have been more excited for my senior year to end so I could start a new life. A clean slate. College. I was going to be a professional dancer and the world would be right there, ready for me to take it. Little did I know my life would forever change that night.

Just before midnight, I felt uncomfortable in my tight, green, satin dress. I told my sister I was going to the room to change into jeans. It shouldn’t take too long.

I was so eager to get to my friends and sister that I didn’t pay any attention to my surroundings. Someone was rushing past me. But, he wasn’t just rushing past me. He stopped behind me.  As I opened the door a crack, even before I could see his face, he shoved me forward, pushing the door wide open which landed me on my stomach and inside the dark room.

It happened for what seemed like hours. I was numb and frightened. Alone as I felt in that cabin, I would feel that same isolation for the rest of my life.

I remember lying there for a bit longer even after I heard the door slowly close behind me.  What jolted me back to reality was thinking I was missing the party. I left my sister alone with our new friends. I took off the dress, stuffed it deep at the bottom of the trash and showered quickly – wanting to erase what I was a part of moments ago. I dressed and rushed back to the dance floor where everyone already was celebrating. I missed the countdown. New Year’s Eve would never be the same again.

I never knew who he was. I will never know if we interacted on that ship. He remains a mystery. What I always will remember are the sounds. As I got older and had intimate relationships, those sounds confused me and intimate acts felt confusing to me. This incident formed the basis for all future intimacies in my life.

When I got home, I remember writing about my assault in my journal. I was a very different person afterwards.

As time went on I convinced myself that I allowed the man to assault me. That it was purely just sex, nothing more. I wanted that to be what happened, so I couldn’t pretend I was a victim. It was my way of regaining control of the event. That’s how I lived my life and maintained myself until it happened again…18 years later.

In November 2014, I was out late with a friend who offered to walk me to my car, but I refused.  I remember the chill in the air and seeing my breath when I exhaled.  As I approached and pressed the button on the key fob to open my car, I felt a painful hit between my shoulders. I remember being dragged on my stomach and pulled into a large patch of grass in a nearby park where it was dark.

My brain shut down. I allowed it to happen again.

All the therapy, self-defense classes and the self-talk of what I would do if it happened again….lies I told myself. I didn’t fight. I didn’t scream. I laid there. Frozen. Scared. Indifferent. I didn’t own my body. Did I ever? I accepted my fate that night. In truth, nothing prepares you for how you will react when you are overpowered and your body is taken over.

There on my stomach, bare in the winter cold, I realized he was done and gone. When did it end?  Did I imagine it all?  As I felt my muscles ache and my body crying in pain, I knew it was real.

At the hospital the next day they probed, touched and questioned me. I hated it. I hated being asked things over and over. I hated how they looked at me with pity and I assumed they were judging me — the girl who was raped not once, but twice. How stupid was I? Twice, Mae? There was no excuse and I felt disgusting.  I realized I had to now deal with my first assault. Finally. In order to heal and really regain my strength, I had to talk.

Over the past few years, my advocacy has reached some intensity and I am proud of it. It was in talking and gaining connections that I felt I was healing myself. Piece by piece. From talking to victims, speaking at events like TED and participating in documentaries such as the Venere Film project, #ImNotAlone, I again have found my voice. This is the real me now. Through my honesty and truth, I am not only helping others, I am slowly helping myself.

I will never know if I will fully heal. Maybe I never will. But, I do know I am actively admitting and acknowledging all I have experienced to at least feel fulfilled for whatever the next part of my life offers. I am doing it by speaking out, advocating with great fervor and hopefully helping to pave a way for every victim and survivor to find a way to again live their lives.

Please join me and more than 3,800 others by signing the pledge at www.ChicagoSaysNoMore.org to say “No More” to the epidemic of sexual violence. When you take the pledge, you’re making a difference.

Mae Flores was among the first to take the pledge and advocate for Chicago Says No More after the organization started in 2015. She is a fervent advocate for the protection of women’s rights and an ambassador for Today I’M Brave and various organizations that focus on the protection of women and violence as well as gender equality. In 2016, EuropeAid honored her as one of the Top 200 Women in the World Development Wall of Fame. Currently, Mae proudly works for Chicago Youth Centers, and also is an award-winning Filipina-American actress.