NEVER TOO YOUNG TO CALL FOR HELP 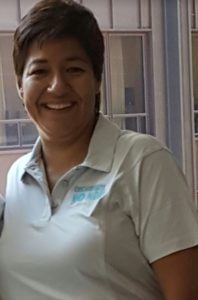 At 19, I was too young to understand I was in an abusive relationship.

I felt lonely and isolated—even though I was in college in Chicago and living with my family and near my friends. One of my classmates who knew my boyfriend mentioned I should think about speaking to a counselor. I knew my parents didn’t like him. My mom saw the signs.

I know now even I saw he was controlling. He wasn’t in school with me, but he had to pick me up after every class. If I had known about domestic violence earlier, maybe I could have gotten away from him sooner.

Now I know the signs: I took the 40 hours of domestic violence training 16 years ago. But I still know how I felt when I was the victim.

So when I answered the hotline during the Chicago Says No More: A Call for Hope telethon, sponsored by Verizon, on CBS 2 Chicago and realized a 6-year-old girl was asking for help for her mother, I knew how frightened she was because I have been frightened.  I was shocked by her age but it took only seconds and a few questions to verify she was actually a child.  On an ordinary day responding to crisis phone line calls, we sometimes hear from kids calling and playing around, but in the 15 years I’ve worked for the Chicago Metropolitan Battered Women’s Network, this is the first time I spoke to a child seeking help for her Mom.

She knows her stepfather is abusing and she knows getting abused is not right. What is hard for me to accept is she already is experiencing DV in her life at such a young age.

I know the courage it took to write down the number she saw on CBS 2 and make the call. It is not unusual for callers to sound like they are hiding and whispering. This child didn’t sound like she was hiding. I asked her where she was and she said her grandmother was watching her. I told her I was glad to take her phone number and she was very brave to call. It will take courage for her to take the further steps I suggested and there are resources that will be deployed. This heartbreaking situation is not resolved and I cannot say anything more at this time.

I am proud of all the people we helped during Chicago Says No More: A Call for Hope.  I know two-thirds of the people who have called the hotline since the event would not have called without seeing the number for the Domestic Violence hotline (1-877-863-6338) during the newscasts.

The best work I do answering the crisis line is letting people know they do not have to feel alone. We are here and available to help. It is the most important job I can do.

Adela Tobias is an officer in the Chicago Police Department, who works part-time as a crisis counselor at the Chicago Metropolitan Battered Women’s Network, and was answering the hotline phones in cooperation with Chicago Says No More: A Call for Hope, sponsored by Verizon, on September 19, 2016. 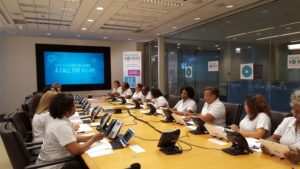