THE LASTING IMPACT OF “A CALL FOR HOPE” 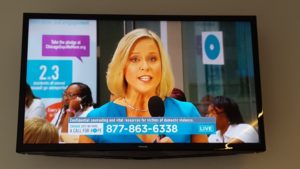 CBS 2 Chicago reporter Dana Kozlov hosted Chicago Says No More: A Call for Hope, sponsored by Verizon, on September 19, 2016 during the 5 and 6pm newscasts

“Callers are afraid we are going to tell them to leave. We don’t. The decision to leave or stay is up to the individual.”

The call volume tripled at the Domestic Violence hotline during the Chicago Says No More telethon on CBS 2 sponsored by Verizon, during the 5 and 6pm newscasts recently. ..

…And the phones are still ringing.

People in domestic violence situations often don’t understand they can call us just to talk and tell someone what they are experiencing. The most important thing we do is find out their location as well as situation and what kind of service they need. Often we can make a direct link to a service provider, so the client only has to make one call.

While we try to encourage callers to consider several options, we do not tell them they have to take action now. Once they learn something, they can’t unlearn it.  One simple phone conversation propels them forward.

Showing our hotline counseling and referral service during the CBS 2 news programs has increased our calls. CBS 2 Chicago’s Dana Kozlov, who is very empathetic, interviewed survivors about their experiences. Together, we’re putting a face to the people answering the calls. This first telethon is a success.

A six-year-old girl called about her mother who is in an abusive situation, and she may be the youngest person to ever call our hotline in 18 years of its existence.

As expected, a few angry men called. When we hear from perpetrators we always explain we help men too. I don’t think they always believe that, but it’s true.

We’ve already seen good outcomes: One victim I’ve been working with since the telethon called in because she needed help with her cats. I am taking care of that client’s pets right now. These animals would have been dumped out on the street had she not found us, or she may have had to return to her abuser. Victims sometimes won’t leave because they’re afraid of what would happen to their pets.

Sure, our DV advocates get discouraged sometimes, especially when we feel we couldn’t do enough. Most of us at the Chicago Metropolitan Battered Women’s Network have been here since the beginning of the hotline. Our 22 trained advocates find their work fulfilling.

You would be surprised at the amount of feedback we get from victims. I have had people walk up to me at community health fairs and say, ‘I called your hotline two years ago and I’m out of that situation.’ When our services were evaluated by the National Institute of Justice, victims said the hotline was critical because they knew there was someone who cared about them.

Non-emergency calls to 3-1-1 or 9-1-1 are normally referred to us and other agencies refer domestic violence victims to us. The Chicago police give our number to every victim they come in contact with, but the exposure on CBS 2 was unprecedented and so was the response.
Having the call volume escalate to three times normal and stay there for who knows how long, is a great way to start Domestic Violence Awareness month in October. Once victims know our service is available, they will continue to call. Getting the hotline number out there to hundreds of thousands of victims is so powerful. Without the telethon there are countless victims who would never have made the call.

You can see, and we can feel, the impact. 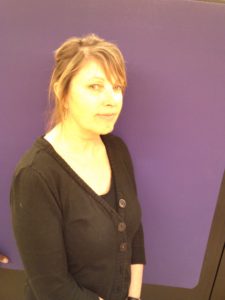 Gwyn Kaitis, MA CDVP, is the executive director of the Illinois Domestic Violence Hotline, which worked in cooperation with Chicago Says No More, Verizon and CBS 2 Chicago on the “A Call for Hope” event, September 19, 2016.