WHAT IF DOMESTIC VIOLENCE JUST STOPPED? 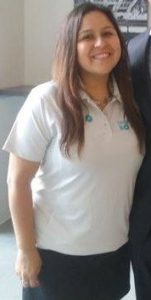 I was honored to participate in Chicago Says No More: A Call for Hope, sponsored by Verizon, a telethon recently held during the 5 and 6:00pm newscasts on CBS 2 Chicago. As one of 15 trained crisis counselors at this event, I responded to viewers who contacted the Domestic Violence hotline (1-877-863-6338) seeking advice about DV services and resources available to them or to someone they know.

As a Steering Committee member of Chicago Says No More, and as Executive Director of Between Friends, an agency preventing and ending domestic violence in Chicago and the northern suburbs, this opportunity to elevate awareness of how victims can get help was a sign of progress. But we still have a long way to go.

When I was asked to be one of the counselors to respond to callers during the telethon, I was more than happy to participate in this way. I viewed the telethon from the front lines. It was a humbling place to be, as I answered call after call. Neighbors were calling, asking what they could do to help their neighbors. One woman called to say she thinks her daughter-in-law is a victim, and asked how she should talk with her son.

For 21 years I have been working with people of all ages to build the healthy relationships and support survivors of domestic violence. I became involved in this work because a friend in high school was in a physically and verbally abusive relationship, and I made errors in what I said and in some of the ways I thought I was supporting her. Ever since then I’ve wanted to use my skills as a counselor and educator to help young people, and others, in potentially dangerous situations.

Although answering the crisis line is no longer part of my daily responsibilities, I never forget how important the interaction is with the person on the other end of the conversation. For many survivors of violence, the journey to safety and healing starts with a phone call.  The sheer variety of people who called during the telethon, and after, proves to me that so many victims, and those who care about them, are isolated.

The problem of domestic violence is not just physical harm; it also is emotionally damaging for individuals, families and communities. Domestic violence can affect any type of person: people who have money; athletes; those who have important careers; same-sex partners.

My mission is to prevent and end domestic violence one person, one relationship and one community at a time. I’m someone committed to social justice and to this movement.  As Chicago Says No More shines a light on what is happening and how we can help, it increases the community’s ability to mobilize more people around prevention.

Yesenia Maldonado is the executive director of Between Friends, a service provider for victims of domestic violence, who provided crisis counseling services during Chicago Says No More: A Call for Hope, sponsored by Verizon, on September 19, 2016. 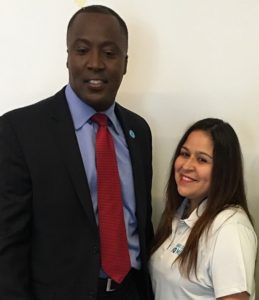 Between Friends executive director Yesenia Maldonado with John Granby, president of the Great Lakes Market for Verizon, sponsor of Chicago Says No More: A Call for Hope.